These pages work best on a desktop.

Why do we need to transpose?

How to transpose music from one key to another

There are two ways you can learn to transpose. It’s good to know both so you have a good understanding but some people prefer the more mathematical way (tones and semitones) and others prefer the more practical way using your harp (intervals). When you have had lots of practice you can start composing without really thinking about it! ​

This is the best way if you are transposing to play a piece of music, rather than in a music theory exam. This is because in an exam they are mean and want to make sure you understand a piano keyboard and all about tones and semitones!
Each note in a scale has a number (Degrees of the scale)
Let’s use a D major. ​

If you wanted to move the music into a different key you simply pick the key and move the degrees of the scale to the new key. Look at the examples below. We are moving from D major into F major (Up a major third). ​

That's all there is to it!

If you are happy with how to transpose using your harp and you are not taking an exam, this next section is not needed.
However, if you are taking a theory exam or interested in the make up of music, read on!
First you need to learn the notes of a piano keyboard.
This is very handy for lots of questions in theory exams.

For higher grades and pedal harps its important to use and know all of the options for labelling the keyboard - with ALL of the enharmonic equivalents. This is because of double flats and double sharps. An enharmonic equivalent is when one note is given multiple names. For example, C natural can also be called B# or Dbb

A semitone (or "half step") is the smallest distance between two different notes.
It’s easiest to see visually on a piano.
If two notes are as close as possible on the piano keyboard, the distance between them is a semitone. Find E and F next to each other on the piano keyboard. The distance between E and F is a semitone; it's not possible to squeeze another note in between them, because there is nothing between them on the piano keyboard.
On a harp a semitone is when you play the same string but move a lever. For example, C natural to C#.
Now find A and B flat. The distance between A and B flat is also a semitone.
​
A tone (or "whole step") is made up of two semitones. However, it is not as easy unfortunately as moving from one string to the next on your harp. This is where drawing a piano comes  in handy! Find G and A on the keyboard. G-A is a tone. We can squeeze a G sharp(/A flat) between them.
E-F sharp is a tone. F natural sits between them.
​
This gets confusing on your harp as some notes are enharmonic equivalents to one another. This means they have different names but sound the same. There are some on lever harp but LOTS on your pedal harp. Examples are G# and Ab. Move the levers and then play the G and A strings. They sound the same! This is why using your harp to count semitones can be tricky and a piano is easier.
The table below shows you how many semitones (or steps) are in each kind of interval. 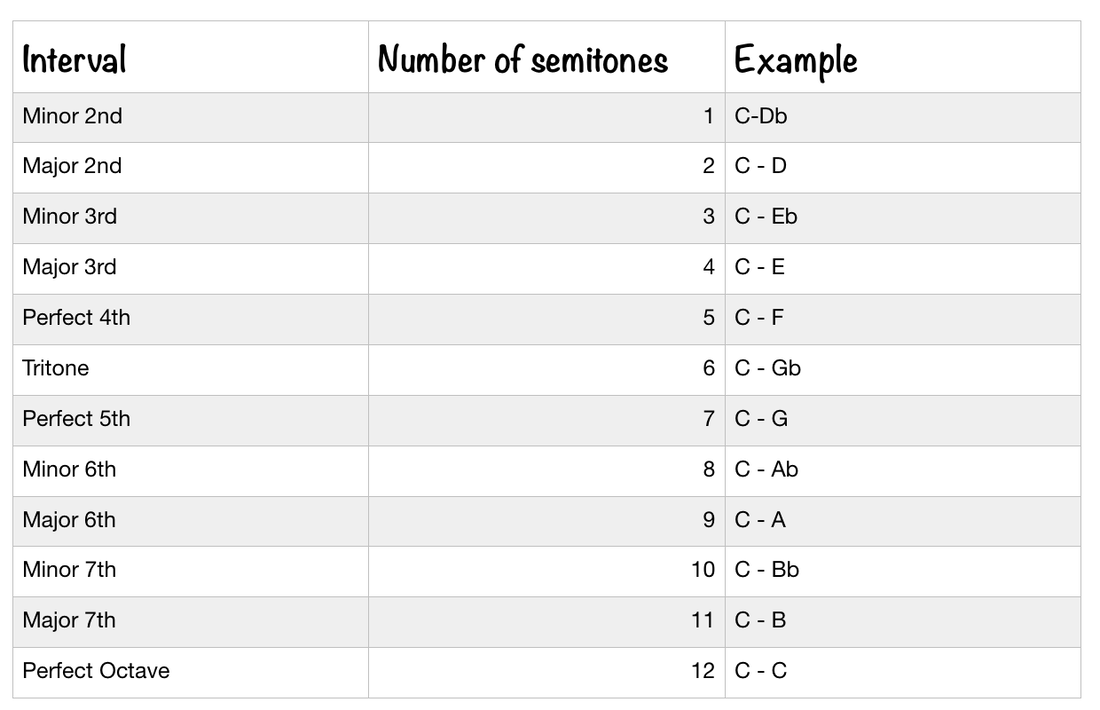